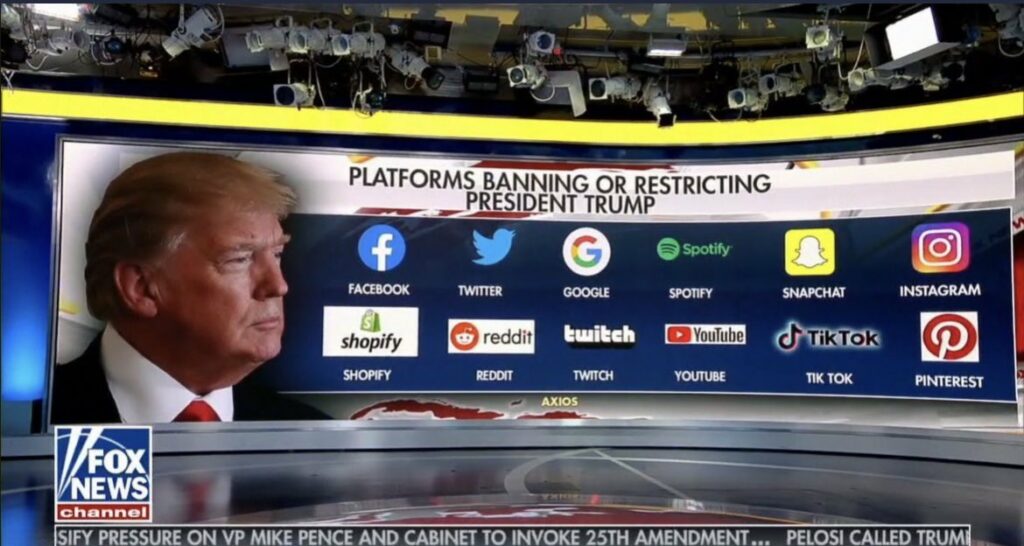 I want to discuss some of the sillier hot takes on the “De-Platforming Trump” actions already occurring (Lots of companies have dropped Trump as a client or user).

The debate needs to be reframed in terms of Freedom & Censorship.

First, a quick note about the cries of First Amendment violations. Try this: Break the seal on the plastic wrapping on that little US Constitution you carry as a prop, and then read it. You will then learn that the First Amendment states:

“Congress shall make no law respecting an establishment of religion, or prohibiting the free exercise thereof; or abridging the freedom of speech, or of the press; or the right of the people peaceably to assemble, and to petition the government for a redress of grievances.

Congress. Not private citizens, not companies. The constitution does not require you to turn over your home or businesses or any other property to allow anyone to communicate about anything.

Especially businesses. (There are very specific, very narrow exceptions, such as company towns. See Marsh v. Alabama). But the general principle is that companies are free to do whatever they want to pursue their business, so long as it does not violate other laws. If you are a baker, you don’t have to sell a wedding cake to someone you dislike. However, your decision cannot violate other people’s fundamental rights. If you decide not to sell to people who because they are black or Jewish, then your decision is discriminatory and therefor illegal.

Said differently, while no one has the absolute right to buy a wedding cake from any specific bakery, but they do have the right to not be discriminated against because of their race or religion.

So, too, goes the rights of social media platforms. They are not government actors, they are private companies trying to generate a profit. That gives them enormous latitude in how they manage their own business affairs. Courts have given corporate management broad rights  to operate as they see fit via a principle known as “The Business Judgement Rule.”

Some factions have tried “Working the Refs” instead. Since they cannot win through the courts, they are trying to make this a First Amendment issue: The Far Right (and even moderate GOP members) have made the claim of political bias. They have argued that Silicon Valley has the obligation to work against its own best interests.

The WSJ offers some of the very worst examples of this thinking, demanding we Save the Constitution From Big Tech. The authors seem to confuse decisions they dislike with violations of the Constitution. To do so, they make the ridiculous claim that “Google, Facebook and Twitter should be treated as state actors under existing legal doctrines.”

This is, of course, nonsense. Jonathan Last of the Bulwark noted, ToS Is Not a Suicide Pact. If a private company has bad actors on its platform hurting its business or reputation, they are free to de-platform them.

I was discussing this with my friend Perth Tolle, who runs the Freedom 100 Emerging Markets index/ETF (FRDM). Her approach is to use “quantitative personal and economic freedom metrics” as the basis for their index. She notes:

“This banning of Trump and other right wing extremists from social media platforms, cloud services, and payments (Stripe latest) is a sign that we are living in a place where there is freedom.

The people/companies who provide something of value (platforms) are able to exercise their freedom to work with or not work with certain actors. I see rule of law, private property rights, and contract law at work. The few who happen to be in power don’t call the shots, the people do.

And the people have decided to, and will continue to decide to work with these companies as long as they are providing something of value.

Get past the faux claims of constitutional violation and simply ask: Do you believe that private companies are free to do what they (legally) want? I hate Facebook as much as anybody, and even believe it is a threat to decent society, but I certainly don’t want to substitute the government’s judgement for the company’s.

We can and should pressure businesses to try to do the right thing. We can vote with our dollars and take out business elsewhere. But stop trotting out intellectually dishonest arguments to say the Federal Government should take away liberty and freedom of private companies.

This is a fascinating subject, with far reaching ramifications. I’d like to spend some more time thinking about what it means, exploring it in a more investor driven context…

Keeping Your Finances On Track In The New Year

This Asset’s Outperformed The Stock Market For 20 Years (And Likely Will This Year...

Hispanic unemployment from Covid-19 cut in half, but can it last?

I get lots of questions from readers about whether or not they should take advantage of their Roth 401(k) (or 403(b)) option. They're...

The key is a sovereign economy backed by gold. With a gold backed currency, everything falls into place… Submitted by David Bryan author of Two...

Are You Easily Distracted and the Hours Fly by? Turn Your Time Into Productivity...

Develop these qualities that will allow you to be more effective. This article was translated from our Spanish edition using AI technologies. Errors may...