• The Year the Fed Changed Forever Jerome H. Powell’s central bank slashed rates, bought bonds in huge sums and rolled out never-before-tried loan programs that shifted its identity. The backlash is already beginning (New York Times)
• ‘Flash Boys’ Led Robinhood Founders to Hide How Firm Made Money The revelation is buried in a Thursday Securities and Exchange Commission enforcement action that accused Robinhood of hiding for years how it made the bulk of its revenue: selling client orders to Wall Street securities firms. The company decided to obscure that fact after “Flash Boys,” Lewis’s 2014 book, portrayed it as questionable conduct that can hurt mom-and-pop investors (Bloomberg)
• The 40 Weirdest (And Best) Charts We Made In This Long, Strange Year A historic election, an unprecedented year in sports, a raging pandemic and an economy in free fall. To cap off this long, strange, difficult year, we’re celebrating the best — and weirdest — charts of 2020 (fivethirtyeight)
• Elon Musk Decries ‘M.B.A.-ization’ of America What is wrong with American corporations? Elon Musk says too many M.B.A.s. are polluting companies’ ability to think creatively and give customers what they really want. His comments criticizing M.B.A.s came amid a broader conversation about leadership before an online audience, where he also encouraged executives to step away from their spreadsheets and get out of the boardroom and onto the factory floor. (Wall Street Journal)
• A Sign the ESG Movement Is Too Big to Ignore: There’s Backlash In the waning days of the Trump administration, several agencies are pushing back on the notion that corporations should prioritize anything other than profits. (Businessweek)
•  How Claude Shannon Invented the Future: Today’s information age is only possible thanks to the groundbreaking work of a lone genius. (Quanta Magazine)
• Let the ultra-rich and influential skip the line for Covid-19 vaccines? Hear me out The impact of price signaling will create the impression of great value, like protection from a deadly disease. This will overcome the stigma we’ve learned that “free” is rarely a good price for anything. (Stat)
• 36 Facts About the 2020 Elections Eleven Trump-won states — Alaska, Indiana, Kansas, Kentucky, Missouri, Montana Nebraska, Oklahoma, South Dakota, Texas and West Virginia — swung more against Trump between 2016 and 2020 than Michigan, Pennsylvania or Wisconsin did. Two — Kansas and Nebraska —swung more against Trump than Georgia did. (Cook Political Report)
• I have the pandemic to thank for this precious time with my old hound, Teddy One of the joys (yes, joys!) of the pandemic 2020 has been this unexpected, sublime time with my old hound dog, Teddy. Teddy is 15 now. That’s 105, in dog years. I have not, during Teddy’s life, been home as constantly as I have since March. (Washington Post)
• The Top Ten Dinosaur Discoveries of 2020 Paleontologists uncovered a great deal about the “terrible lizards” this year  (Smithsonian)

Visualizing the Biggest Tech Mergers and Acquisitions of 2020 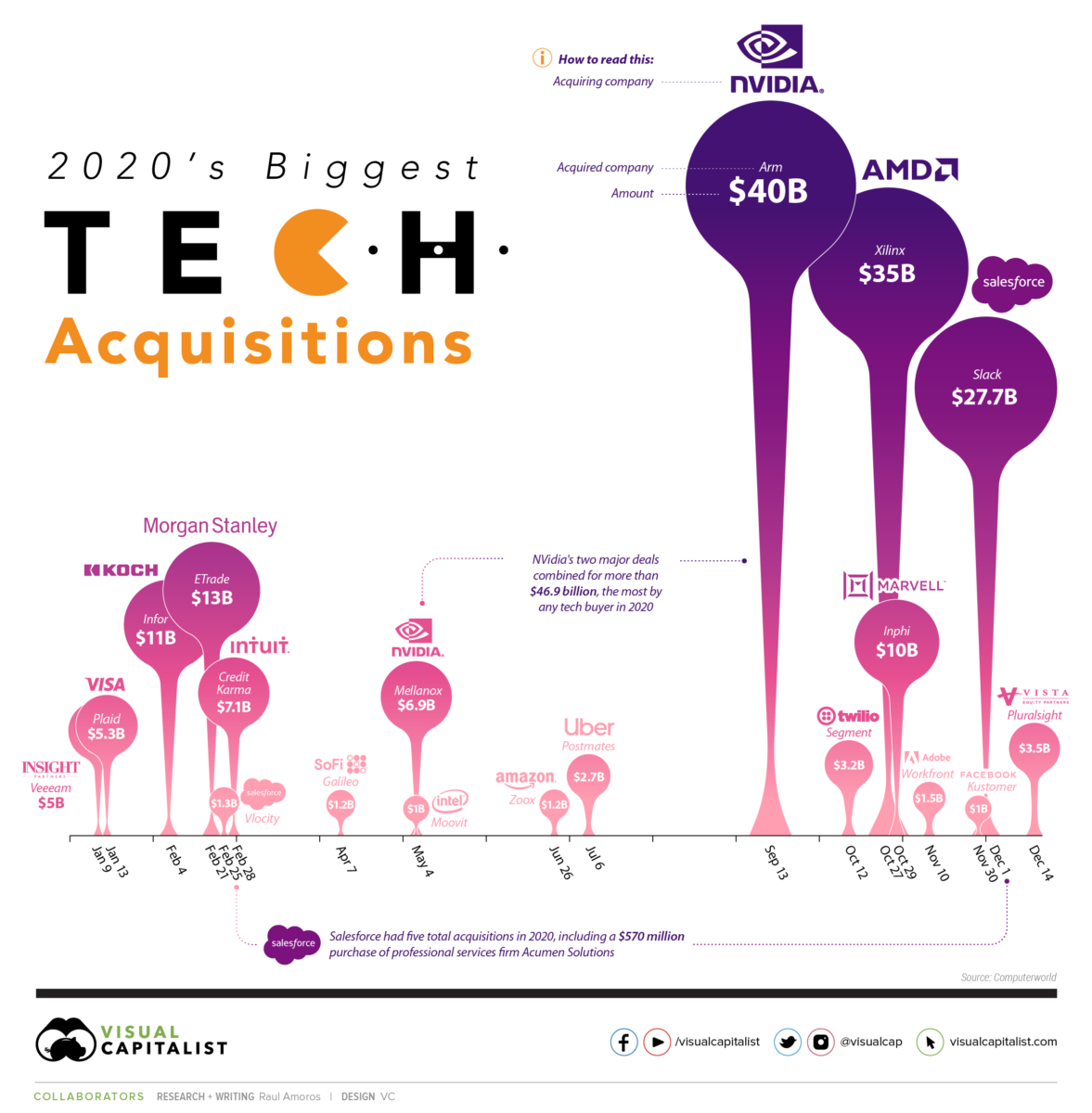 AstraZeneca Claims to Have the ‘Winning Formula’ for Its Vaccine

The international currency of choice, the US Dollar, is steady and unwavering, as if nothing will move it… by  J. Johnson via JS Mineset Great...

In partnership with entrepreneurs, Nestlé ventures into the food service operation with its leading brand in condensed milk. January 23, 2021 4 min read This article was...

4 Life-Saving Traits to Leading Teams That Can Survive Anything