• This American Mess: Thanksgiving is here. Unfortunately, America is all over the place. Half of the states have travel restrictions of some kind. 4 out of 5 epidemiologists are having Thanksgiving at home with just their household. The C.D.C. is begging people to stay home over the holidays in expectations of an explosion of coronavirus spread. But, this Thanksgiving, Americans are still absolutely gonna America anyway. (New York Times) see also Why Even A Small Thanksgiving Is Dangerous With COVID-19 rates on the rise basically everywhere in the U.S., those small gatherings are being blamed for spreading the virus, and experts say they don’t want us to have Thanksgiving celebrations with people outside our household bubbles. (FiveThirtyEight)
• Inside YouTube’s plan to win the music-streaming wars YouTube has always been important to the music business. Now, with YouTube Music, it’s trying to build a music universe Spotify and Apple can’t touch. (Protocol)
• SPACs: The once obscure, derided financial product that just might transform deep tech venture capital Unless you’ve been hiding under a rock over the past year or perhaps docked at the International Space Station, it’s been impossible to miss the Special Purpose Acquisition Company (SPAC) craze that has overtaken Wall Street. (Medium) see also A16z is now managing $16.5 billion, after announcing two new funds The funds may seem somewhat typical, given the size of new funds that venture firms have been raising in recent years. Still, these are extraordinary amounts given that a16z was founded just 11 years ago. (TechCrunch)
• Flee the city, keep your salary? Not so fast say more employers Global advisory firm Willis Towers Watson shows that many employers aren’t necessarily planning to let you keep your full paycheck if you move. About 20% of employers are “setting pay levels by first determining the market value of an employee’s skills and then applying a geographic differential based on where the employee is located.” However six in 10 employers say they will continue to pay remote employees the same as in-office employees “no matter where they work.” (Fortune)
• Fox News Is No Longer Insane Enough for Fox Viewers: They built a huge outrage machine. Then some of them tried to be real news people for five minutes, and now the outrage machine is outraged at them. (Daily Beast) see also Fox News’s election fraud pandering may be its most dangerous lie yet Rupert Murdoch doesn’t believe Trump was cheated. But he’s letting Fox personalities spin tales that could permanently harm America. (Vox)
• COVID-19 falsehoods lead Stanford to examine ties to right-wing Hoover Institution Stanford University took a step that might be career-shattering in almost any field except academia: It formally distanced itself from a faculty member. (Los Angeles Times)
• Bentley Goes All-In on Electrification “Beyond 100” strategy for the British company, founded in 1919, includes two new plug-in hybrids (PHEVs) in 2021 and PHEV availability on every model by 2023, a battery-electric car in 2025, PHEVs and battery cars only by 2026, and an all-electric range by 2030. (Penta) see also The Secrets Behind Your Rolls-Royce, Bentley, Bugatti Hood Ornaments Inside the close-knit world of the badge fabricators for the greatest automotive brands in history. (Bloomberg)
• Azerbaijan’s drones owned the battlefield in Nagorno-Karabakh — and showed future of warfare Armed drones have increasingly become part of warfare since the Pentagon deployed its Predator in Afghanistan following the 9/11 attacks. Missile-firing drones are now produced in many countries including Turkey, China and Israel, and have been used by various sides in battles including Libya’s proxy war. (Washington Post)
• This GOP Lawmaker Denounced QAnon—and Fears for His Party “There’s a lot larger percentage in the Republican Party who believe there’s a deep state coup or cabal than people might think.” (Wired) see also The 31-day campaign against QAnon In Georgia, what happened when a ‘nice guy’ named Kevin Van Ausdal ran for Congress against a candidate known for her support of extremist conspiracy theories. (Washington Post)
• The Nerdy Quarterback Who Solved Football—50 Years Ago Virgil Carter pioneered expected points—a foundation of modern NFL analytics. Half a century later, NFL teams are still catching up to his thinking. (Wall Street Journal)

Be sure to check out our Masters in Business interview this weekend with Dennis Lynch, Head of Counterpoint Global at Morgan Stanley Investment Management, running $130 billion. Several of the funds Lynch runs have doubled YTD in 2020.

Industries where employees can operate remotely without significant loss of productivity 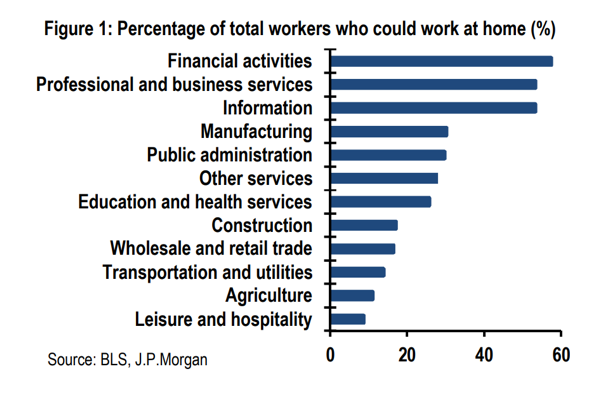 3 Ways for Entrepreneurs to Stay Visible During the Pandemic

The End Of The US Dollar! More Countries Swap Out Of World Reserve Currency

How to Keep Up With Big Tech’s Hiring Spree

What Is Personal Property Insurance And Why Do You Need It?