• The story of mRNA: How a once-dismissed idea became a leading technology in the Covid vaccine race For decades, scientists have dreamed about the seemingly endless possibilities of custom-made messenger RNA, or mRNA. But turning scientific promise into medical reality has been more difficult than many assumed. Although relatively easy and quick to produce compared to traditional vaccine-making, no mRNA vaccine or drug has ever won approval. (Stat)
• Masayoshi Son Again Pulled SoftBank From the Brink. This Time He Had Help. The world’s most unpredictable technology investor was coached out of the crisis by hedge fund Elliott Management, a major shareholder (Wall Street Journal)
• Expect an Increased Tempo for ESG Investing Post-2020 A pandemic and calls for racial equity have only accelerated sustainable investments, and shaped the agenda for next year. (CIO)
• The $36 Trillion Bill for Neglecting Climate and Free Trade Taken together, rapid action against rising temperatures and a renewed commitment to globalization would put the world economy on track for 2050 output of $185 trillion. Delaying moves to cut carbon emissions, and allowing cross-border ties to fray, could cap it at $149 trillion—the equivalent of kissing goodbye to the entire GDP of the U.S. and China last year. (Businessweek)
• The ‘Problematic,’ VC- Threatening Study That Has Split Harvard Professors Start-up founders barely matter, according to new research. (Institutional Investor)
• Quibi Leaders’ $1.7 Billion Failure Is a Story of Self-Sabotage Jeffrey Katzenberg and Meg Whitman are phenomenally successful businesspeople with precisely the wrong instincts for a streaming service. (Businessweek)
• The Right-Wing App That Rocketed to No. 1 After the Election Right now, Parler looks a lot like the reality President Donald Trump is trying to conjure up. Slate)
• What will the press do without Trump? How will we function without a towering political figure to kick and be kicked around by? And, what will the press do about Trump? Once he’s out of office, how much longer will we allow him to set the news agenda? (Columbia Journalism Review)
• The Five Things Biden Must Do to Repair the Harm Trump Has Done The president-elect must begin to build a modern, expert-led civil service and bring talent back into the executive branch. (Bloomberg)
• ‘I am going to make it through this year if it kills me’: the song lyric that’s gone viral Tristram Fane Saunders speaks to The Mountain Goats’ John Darnielle, whose track This Year is enjoying an unexpected resurgence in lockdown (Telegraph)

Be sure to check out our Masters in Business this week with Penny Pennington, Managing Partner (CEO) of Edward Jones. The 98-year old Fortune 500 financial services firm has over 7m clients, with $1.3 trillion in assets and 17,000 financial advisors. Pennington is first non-family member to manage the firm; she is ranked #33 in Fortune’s Most Powerful Women in Business list. 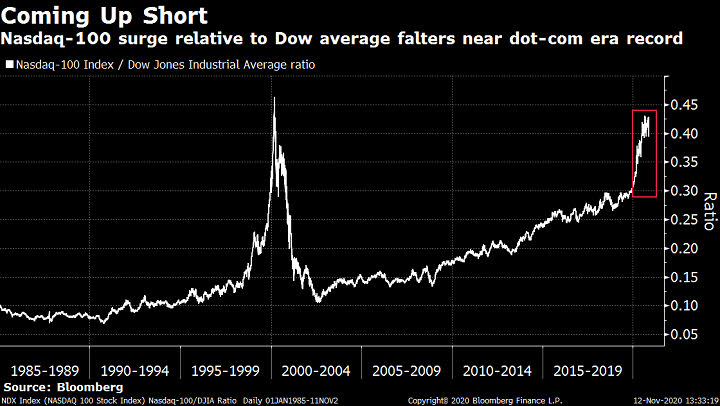 What is a Recession? – The Big Picture

This proposal is so ridiculous that Arturo Elías Ayub begged his teammates at Shark...

7 Common Questions Clients Have Before Selling Their Home

EIU warns of the post-Covid ‘zombification’ of advanced economies

The Best Way to Boost Your Productivity Without Even Trying

The brewery offers students from all over the country the opportunity to pursue a professional career by providing them with 100% coverage of...

Federal Reserve officials indicated at their last meeting that adjustments could be made soon to their bond-buying program as the central bank looks...

Dow futures rise more than 100 points ahead of U.S. Election...

Biden energy plan may be more similar to Trump policy than...